With the resurgence of the Teenage Mutant Ninja Turtles franchise, the RSPCA caution children, and their parents, not to buy these reptiles as exotic pets, mindful of the estimated 250,000 red-eared terrapins purchased during the first wave of ‘Ninja Turtles’ in the 1990s. Bought when the size of a 50p coin, they can grow to the size of a dinner plate, and require a specialized diet and care. Releasing these exotic pets to the wild is cruel, illegal and unwise. In the UK’s cold climate, however, these tropical turtles rarely survive long, but if released into warmer, more suitable territory, say in China, they can do untold damage to sensitive and globally important wetland ecosystems.

Working with our colleague Dr Zhaomin Zhou of the China West Normal University in Nanchong, we have investigated the increasing scale of turtles sales and release across China, particularly as driven by on-line sales platforms, such as Taobao.com, China’s equivalent of Ebay. Although trading in turtles is illegal in China, especially when internationally protected endangered species are involved, authorities turn a ‘blind-eye’ to these less charismatic species, focusing policing resources mostly on ivory, rhino horn, etc (as we have investigated previously). As a consequence, we documented trade volumes of around 432,000 snapping turtles (sold by 472 vendors) and 3,360,00 slider turtles (469 vendors) over a single year – both species hailing from the Americas. Yet more worrying is that these sales patterns were linked to wealth, and originated from the most affluent 106 of China’s 338 prefectures (see figure below). Therefore, with increasing economic prosperity in China, this problem is only likely to worsen. Tragically too, the prefectures with the worst illegal turtle sales problem, with 17 prefectures accounting for 68% of snapping turtles sold and 26 accounting for 82% of sliders, largely correspond with the Yangtze river basin. Turtles released into this ideal environment thrive and establish significant alien invasive populations. In a perfect storm, this region is also home to 65% of China’s aquaculture facilities, raising, amongst other things, turtles to supply demand for pets, traditional medicine and restaurants. 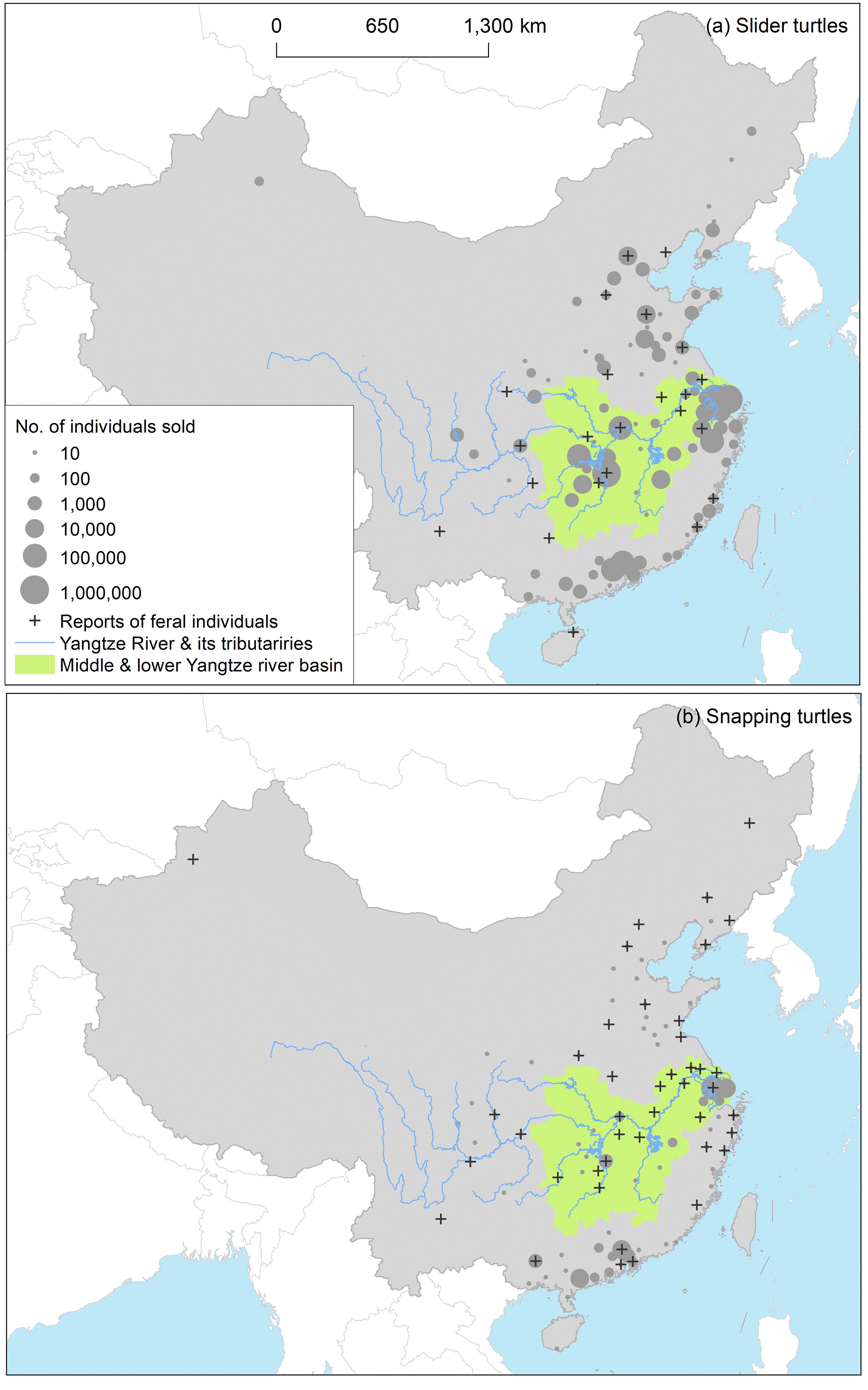 Looking at reports in China’s Baidu News, we found 30 reports of ecological damage caused by slider turtle populations and 74 mentioning snapping turtles also focused in the Yantze river basin, over the last decade. This suggests that alien turtles are now posing a real and existential problem.

What can be done? Well, it’s a socially, culturally and economically complex issue in China, but we advocate drawing attention to the problem by making it compulsory that internet trading sites post ‘ecological hazard warnings’ on the sale of turtles, and  other exotic pet species liable to end up in the wild.