The only good one is a dead one, or is it?

When I began research on red foxes in the early ‘70s, the most common refrain, whether from vet’s battling rabies, gamekeeper’s rearing pheasants or shepherds was “the only good ones a dead one”, so it’s a great pleasure to find that a generation of research hints at non-lethal control actually working, writes David Macdonald in this report of a collaboration led by Lily van Eeden of the University of Sydney. Lily led a distinguished team seeking to find a consensus answer to the question: How should we manage conflict between large carnivores and livestock? In a detailed and meticulous review of evidence from a libraryful of technical papers, they conclude that the very slowly accumulating evidence is that nonlethal methods can be more effective than culling carnivores.

Throughout human history, large carnivores have attacked and eaten livestock. The threat of attack has resulted in widespread persecution of carnivores on all continents, such that large carnivore populations have been reduced and even eradicated throughout some of their range. Today, as support for large carnivores conservation is increasing, some are re-establishing their former distributions including in human-dominated landscapes. Ways of fostering co-existence, and of reducing the anxieties of doing so, are a top priority for the conservation biologists toolkit.

Lily pointed out to us that, considering the importance of the topic and the plethora of papers attempting to tackle it, it was surprising that there has been little evaluation of the mitigation methods used to protect livestock. So, that’s what we did. The problem, however, is that all too few studies are designed in a way to deliver decisive answers, so after a painstaking search of the literature only 43 studies (from 35 reports and published articles)  met our strict criteria for inclusion in a meta-analysis. The difficulty arises from a lack of standards in evaluating and reporting on mitigation effectiveness which has resulted in inconsistencies and limited reporting. 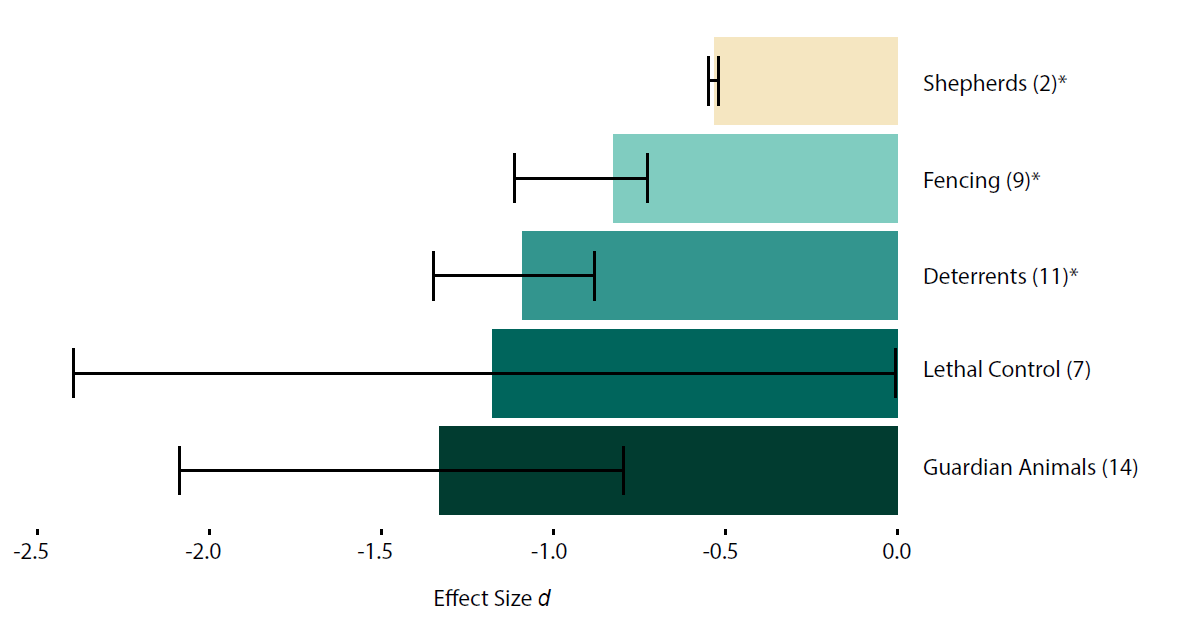 Results of the meta-analysis reveal evidence for the effectiveness of different mitigation methods for reducing livestock loss, measured as Hedges’ d. A negative d value indicates there was a reduction in livestock loss.

From the published studies, which may or may not reflect reliable generalisations, livestock guardian animals had demonstrated the most success in reducing attacks on livestock. This was followed by lethal control, although this traditional approach was characterised by the greatest variation in outcome between studies (in some, unsurprisingly, it appeared to make things worse). One side of the coin is reducing livestock losses; the other is discouraging retaliatory killing of carnivores (especially if it doesn’t work), and the review indicated that sometimes financial incentives reduced peoples’ tendency to seek revenge.

This review and the associated meta-analysis, published in Conservation Biology (http://onlinelibrary.wiley.com/doi/10.1111/cobi.12959/full), is important for two reasons. First, it offers some general insights into the effectiveness of different approaches to mitigating the conflict between livestock farmers and predators, and suggests that non-lethal control is sometimes effective. Second, and as a result of difficulty in finding really robust studies, it emphasises the importance of water-tight experimental design and the subsequent consistent approaches to monitoring and evaluation of outcomes. Management efforts should be based on evidence, and even after a generation of conservation biologists preoccupied by this topic, the evidence base for context-specific recommendations for managing conflict are too few.