Cats may have nine lives, but who knows because most of the 37 or so species of Felid are so secretive that biologists know next to nothing about even one of their lives, writes David Macdonald. This was true about South America’s Geoffroy’s cat until Flavia Tirelli got to work on them. From the distinguished stable (cattery?) of long-time WildCRU collaborator Eduardo Eizirik, Flavia developed her project during a prolonged stay at the WildCRU. Now the fruits are published in the Journal of Mammalogy (Entitled: Revealing the spatial organisation and social dynamics of Geoffroy’s cat in the Brazilian pampas, by an integrative behavioral, ecological and molecular methodology).

Combining radio-tracking and camera trapping Flavia led us in revealing much about the hitherto unknown spatial arrangements and dynamics of a population of Geoffroy’s cat in the Brazilian pampa, set within a first exploration of inter-individual genetic relatedness (which didn’t seem to have much bearing on the spatial structure). A puzzle for the future is the apparent relaxed attitude towards territoriality of some of the cats. Flavie and her team are continuing to explore the lives of Geoffroy’s cats, with an eye to their conservation. 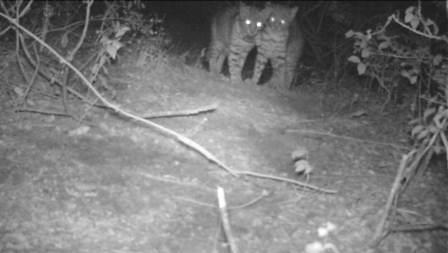