Wildlife causes problems for people all over the world. Efforts to tackle ‘pests’ often involve killing and/or poor welfare for astronomical numbers of individual animals. The scale of the problem and how people’s attitudes towards species are affected by real or perceived experience of pest problems have not been well studied. We surveyed 2,000 members of the UK public about their relationship with wildlife, and about wildlife management, in and around their homes. Our survey focused on ten species (species/animal groups) known to provoke ‘control’ measures – badgers, foxes, grey squirrels, gulls, mice, moles, pigeons, rats, rabbits and wasps. Most mammals were largely viewed positively, badgers most frequently. Rats, wasps, gulls and pigeons were mainly viewed negatively, with rats attracting the highest frequency of negative attitudes (Figure 1). 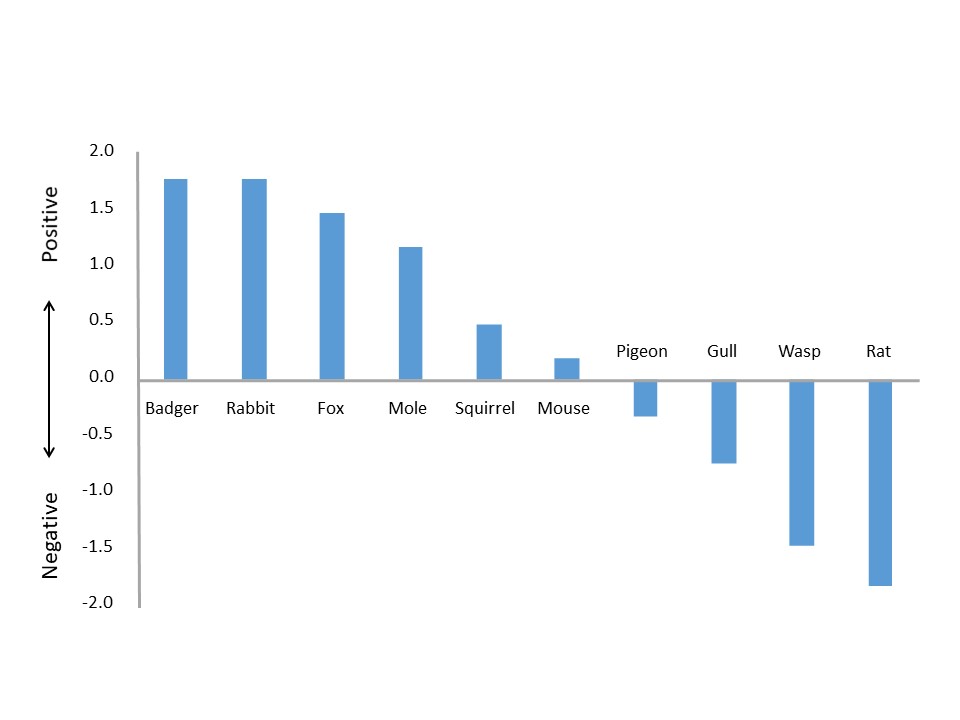 Wasps, mice and rats were the species most often reported as causing problems. Attitudes towards species were related to personal experience of problems, although gulls were less popular than predicted based on experience of problems and mice were more popular than expected. People were more likely to think that a species caused problems for UK people in general if they had experienced problems with that species themselves. However, this was not the case for rats, which were much more widely believed to cause problems for people generally than would be expected based on people’s personal experience of problems (Figure 2). The particularly negative feelings towards rats might be related to their reputed link with spreading the bubonic plague (or ‘Black Death’), which killed 60% of Europe’s human population in the 14th century (the rat’s actual role in this remains a matter of debate). 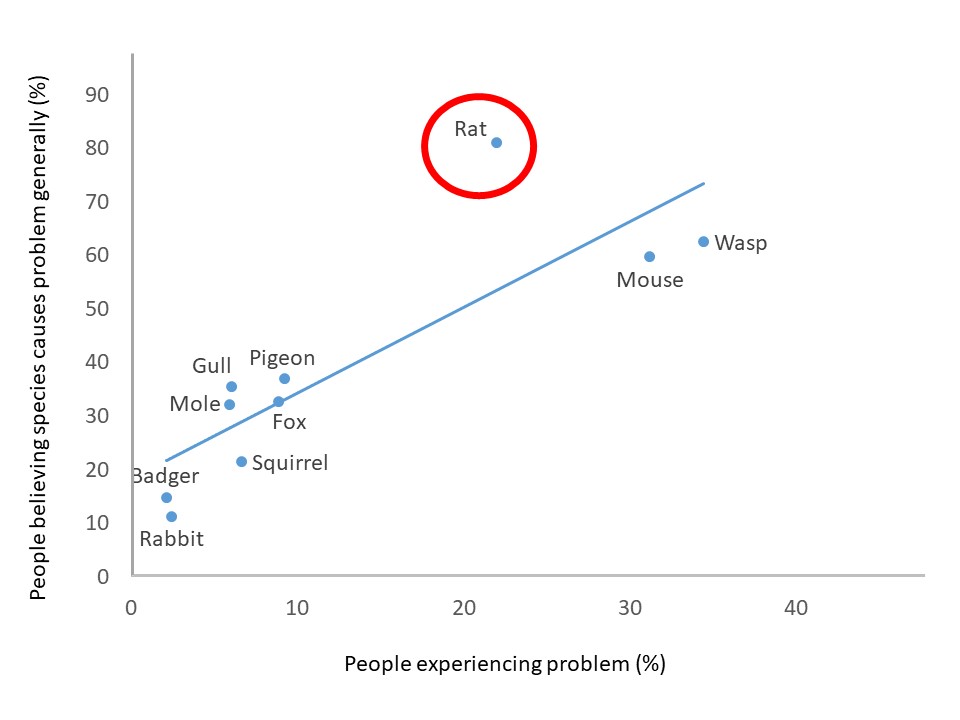 People largely tolerated problems with squirrels, pigeons, foxes, badgers and gulls, in the sense that they did not deploy any control methods. But those thought to be caused by wasps, mice, and rats were the least tolerated (most likely to be controlled). In general, where people attempted to control problems with wildlife, they opted to use Do-It-Yourself (DIY) control over professional control, except when dealing with wasps. Their priorities for a control method were that it should act quickly, have a lasting effect, and be safe for both people and non-target animals. While not a top priority for people, the welfare-friendliness of ‘pest control’ was generally considered somewhat important in the professional control of all species and in the DIY control of badgers, foxes, moles, mice, pigeons, gulls and squirrels. And there was evidence that even where people accepted lethal control, they were concerned that it should be welfare-friendly.

The traits that people associated with different species varied widely. The species most often causing problems were said to: ‘come into our homes’ (mice: 55%, rats: 51% and wasps: 35%) and ‘spread disease to people’ (rats: 63%), or ‘spread disease to pets/domestic poultry etc.’ (rats: 43%). Nearly half of all respondents (46%) associated wasps with the trait ‘attack people’. Many thought that rats and mice ‘eat our food’ (rats 46%, mice 41%) or ‘damage our property’ (rats 44%, mice 38%), while ‘fear’ of the species was a factor for wasps (25%) and rats (19%) and mice (7%) (Figure 3). We found that where people associated a species with spreading disease or causing damage to property, or where they were afraid of the species or perceived its numbers to be too high, they were more likely to refer to it using negative terms, such as ‘pest’ or ‘vermin’. Labelling wildlife in this way may encourage people to accept low welfare methods of managing problems with those species. 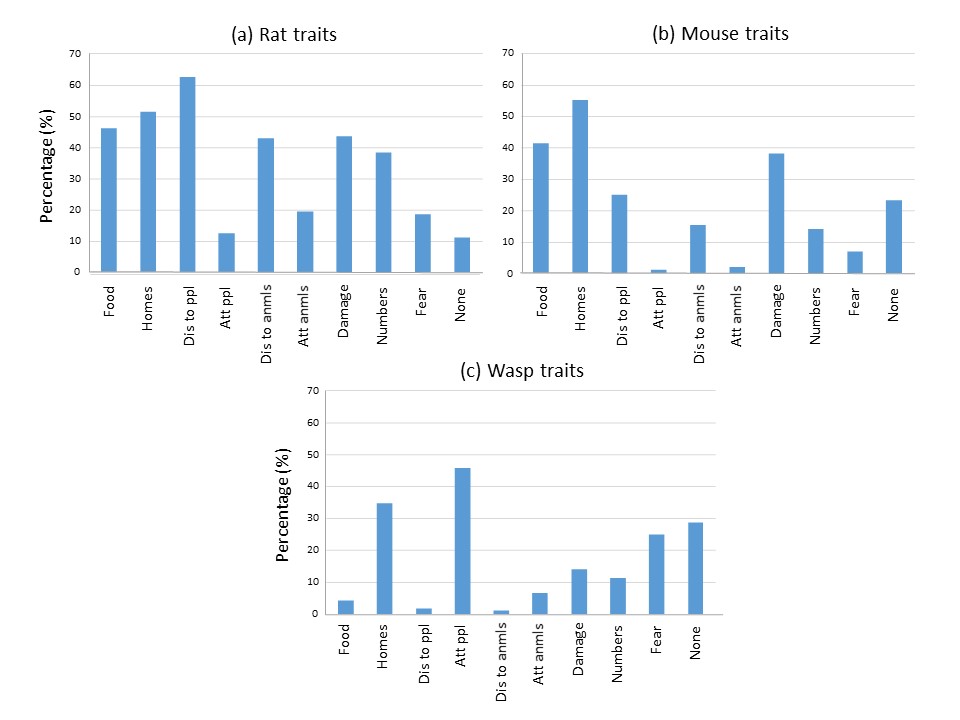 The scale of wildlife control we observed leads us to conclude that more emphasis on preventing wildlife problems through proofing and deterrence, and in some cases by promoting greater tolerance (such as by managing mole ‘damage’ rather than removing moles), would bring significant benefits to animal welfare. Councils and other interested organisations should provide good quality, standardised advice, for example, better information on preventing problems (such as on proofing poultry runs against rats and avoiding dive-bombing by gulls), and when necessary on resolving them as humanely as possible. Tackling myths about the risks involved with some species, such as attacks by foxes, may also help to reduce interventions. Informing people about the benefits wildlife brings, such as pollination by wasps, may also help to improve tolerance and reduce use of insecticides. Commensal rodents, and rats in particular, seem to be the main targets of council public pest control. Rats are also the species least liked and least tolerated by the public. There is concern about the welfare impacts of rodent control methods, such as anticoagulant rodenticides and glue traps, and given the number of rats and mice killed in the name of pest control, the potential welfare impact is huge. This impact might be significantly reduced by investment of time and money into prevention of problems rather than post-hoc control of wildlife. And councils, pest controllers and manufacturers of pest control products are missing an important opportunity by focussing on control rather than prevention.