Kinabatangan: In a ground-breaking study published in the journal Biological Conservation, researchers in Borneo used satellite collars to provide the first detailed information about the movements of one of the world’s least known wild cats – the Sunda clouded leopard – and to provide recommendations for their conservation. The study took place in the Lower Kinabatangan Wildlife Sanctuary, a human-dominated, yet regionally important protected area in Sabah, Malaysian Borneo. The international team of researchers tagged four Sunda clouded leopards with these high-tech devices and used sophisticated modelling approaches to investigate what factors influence their movements through the landscape, and to explore how different future landscape change scenarios may affect them. This work was supported by Yayasan Sime Darby, Robertson Foundation, Recanati-Kaplan Foundation, Clouded Leopard Project, Houston Zoo, Point Defiance Zoo and Aquarium and Panthera. 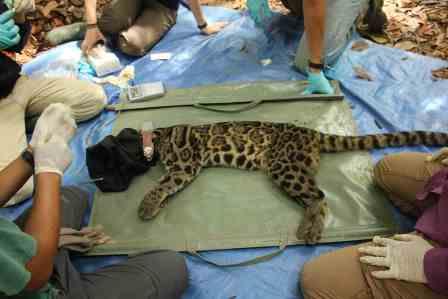 Rahsia, the only female Sunda clouded leopard collared during the project (copyright: DGFC)

Dr Andrew Hearn, from Oxford University’s WildCRU, who led the study said, “we found that forest canopy cover facilitates the movements of these cats through the landscape, but that recently cleared or underproductive and flooded oil palm plantation areas tended to resist their movements”. Hearn went on to say that “our study provides the first evidence that forest cover is crucial to maintain the connectivity of clouded leopard populations, and highlights that the protection of the large areas of privately owned forest in the Kinabatangan, much of which is earmarked for conversion to plantations is critical for their survival in the region”.

Dr Benoit Goossens, Director of the Danau Girang Field Centre and Reader at Cardiff University, explained that “our research showed that the conversion of frequently flooded and underproductive plantations areas to forest would bring large benefits to Sunda clouded leopards, whilst minimising impacts to the plantation industry”. Goossens went on to say that “we predicted that the reforestation of narrow riparian corridors may be an important and cost-effective conservation tool for this species.” “These findings will be integrated in the State Action Plan for the Sunda clouded leopard that is currently drafted and will be launched in September 2018,” concluded Goossens.

Dr. Samuel Cushman, Director of the USDA Forest Service Center for Landscape Science, and study collaborator who developed the analytical and modelling approaches, said “the analysis produced a very clear finding that clouded leopards are highly resistant to moving outside of forest cover and the scenario analyses provide clear and useful guidance to managers about the costs and benefits of alternative conservation planning in the Kinabatangan region.”

Professor David Macdonald, Director of the WildCRU said that “Clouded leopards may be the most difficult felid to study in the world, so our findings are a triumph at the intersection of naturalistic skills, high tech science and policy relevance”. 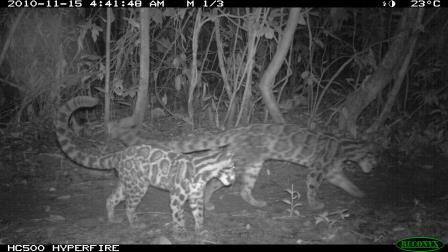