Wildlife Conservation Course 2017 at the University of Nottingham Malaysia Campus

This may sound like the plot for an action movie, but it’s actually the basis for a conservation education course that equips conservationists to handle all-too-real environmental challenges.

Devised and directed by University of Oxford Postdoctoral Researcher and Educator Cedric Tan, ‘Wildlife Conservation Course 2017’ will use team challenges to immerse students into educational scenarios that engage the mind and develop conservation skills.

Coming up in July-Aug 2017, the “Conservation Heroes” edition is actually the third course of its kind. “The courses in 2015 and 2016 were a huge success,” Cedric said.  “Students went away impressed and inspired, players bonded, and we built capacity among those working in governmental and non-governmental organisations to protect wildlife and the environment.”

The 2015 course was themed around a role-playing game – participants competed in ecological challenges for cards that would give them a better chance in a final battle against their tough opponents. In the 2016 Murder Mystery edition, contestants earn clues with each module to help them solve a tiger murder that could be due to one of a number of real-world causes of species extinction (poaching, habitat destruction, etc). This year’s challenge is different. With each lesson, players gain superpowers to help them collaboratively save the carnivores in distress.

The “games” played embed environmental challenges. An example would be the ‘conservation genetics casino.’  In this game, the five colours of chips would represent different genetic characteristics in a population of animals. Green might mean resistance to disease, blue might mean adaptability to climate-change induced weather patterns, and so on. Contestants would have to bet, rise or go all-in to give their population the most diverse set of genes possible – exactly what a real population of animals would need in order to survive in the increasing fragmented forests across Southeast Asia. Spanning 13 days, the course will include a wide variety of modular games that work together to create a body of knowledge, preparing contestants to look at conservation from an all-rounded big picture perspective.

Beyond functioning as teaching tools, these games are also educational experiments. In collaboration with Associate Professor Ahimsa Campos-Arceiz and Dr. Jiin Woei-Lee from the University of Nottingham Malaysia campus, Cedric’s research team has recorded behaviour, grouped students into teams based on their personality types, and observed the details of interaction and effectiveness of the course. The findings will help create education that truly inspires.

“We record students’ perception of the lessons, learning effectiveness via quizzes before and after each lesson, and student behaviors such as asking questions, bored behavior, and joyful (laughing, cheering) behavior,” Cedric said.  “We also keep track of bigger-picture impacts like long-term student recall of content.”

“Our research has demonstrated multiple benefits of this experiential gaming approach such as increased attention retention, increased engagement and added intrinsic motivation.”

Cedric’s research is based on the integration of psychology, arts and social sciences, but his heart is with environmental conservation.  His research and courses are thus providing an invaluable service to the countries in Southeast Asia, a region which is exceptionally rich in species diversity but struggling with environmental degradation at every turn. Malaysia – and all of Southeast Asia – needs more citizens and professionals engaged with conservation.

Cedric is also directing a workshop in China Xishuangbanna botanical gardens this August on innovating education with games, educational videos and role-play.

To apply to the Wildlife Conservation Course 2017, please send your CV and a short personal statement to Dr Cedric Tan at cedric.tan@zoo.ox.ac.uk. Please note that the deadline for applications has been extended to Monday 19th June 2017. 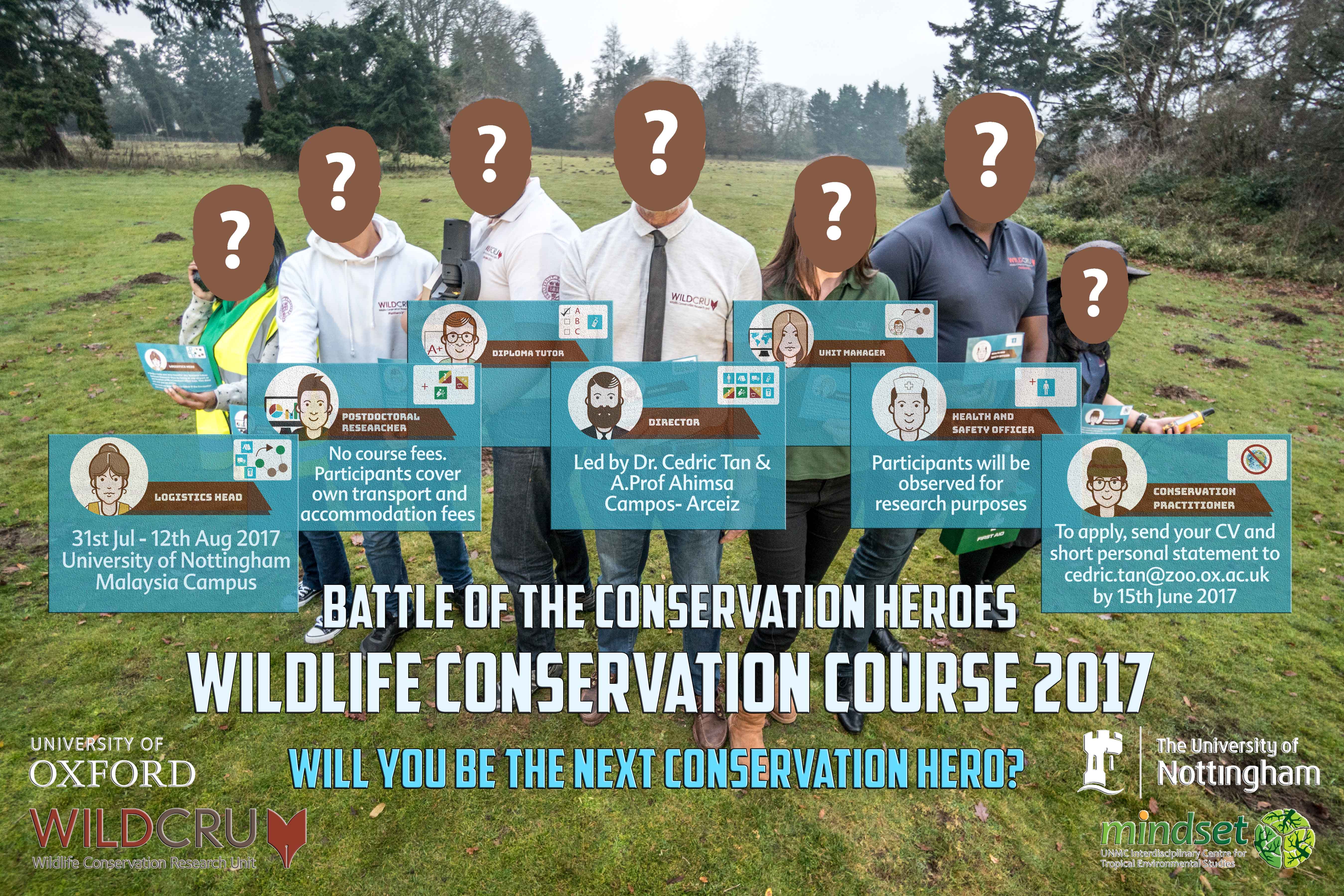