The effects of weather conditions on badger population dynamics

The local availability of earthworms (and other foods) is very sensitive to microclimatic conditions, with drought or frost reducing food supply significantly.  Because of this reliance on earthworm availability, badgers have provided an extremely sensitive model for looking at how the long-term survival dynamics of the population, as well as short-term behavioural adaptations, respond to weather patterns. This is the specialist interest area of project leader Dr. Chris Newman, in the context of climate change effects. We have found that badgers actually benefit from mild winters (heavier, better survival, more cubs the next spring), although warmer conditions reduce reliance upon winter torpor, and can lead badgers to suffer more traffic accidents as they wander further during the February-March breeding season. Summer droughts prove problematic, however, especially for developing cubs that suffer simultaneously from a lack of earthworms and malnutrition and from endemic gut parasites, to which they have not yet acquired immunity. 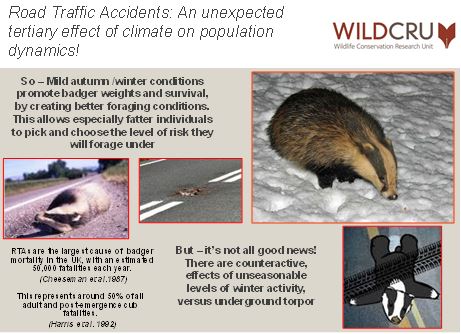 Crucially it is weather variability that has a negative effect on badger survival. Badgers like conditions through the year to conform to those they evolved to accommodate, and so the fine-tuning of their adaptive behaviours is thrown off course by aberrant weather patterns. This is an important and often overlooked fact, because an ‘average’ year could be comprised by rapid oscillation between unusually hot and cold days, and so it is essential to peer behind the curtain of mean weather conditions. 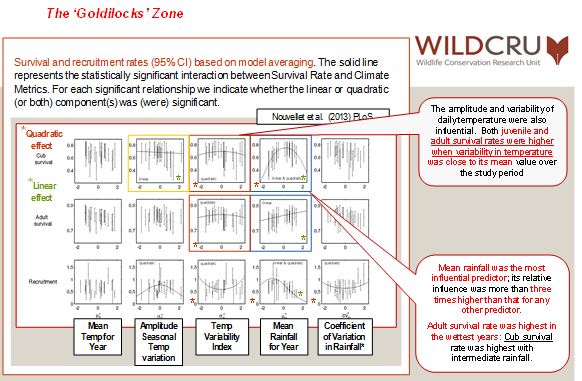 Our latest research has also shown that fat badgers are more resilient through periods of food scarcity or inclement foraging conditions and can stay underground more to escape bad weather. In contrast, thin, desperate badgers draw a different conclusion; better to die trying to find food that to waste away underground with insufficient body-fat reserves. Of course, when a badger is below ground it cannot be trapped, and so we have found that prevailing weather conditions can skew trapping success and short-term population estimates, and bias the mean body-condition recorded for the population. This unique work highlights the importance of being able to distinguish true changes in population demographics over time in response to climate change, rather than just changes in the behaviour of the species, altering the rate at which it can be observed or caught. Practically, this also means that any population intervention, for example badger culling of vaccination to manage bovine tuberculosis (bTB), is likely to fall short of targets if it is undertaken during poor weather conditions (see: Fair weather badgers: http://www.ox.ac.uk/news/science-blog?search=badger&tag=All) 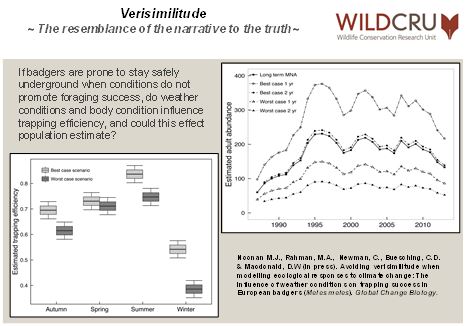 The Badger Project
Background
How do we study badgers?
Insights into badger society
Genetics and mate choice
Social interactions
What we need
Our current team
References