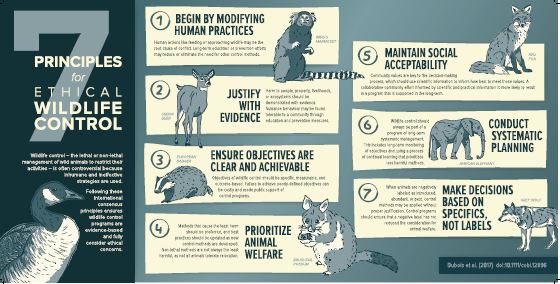 The Wildlife Conservation Research Unit has been conducting research to benefit the welfare of wild animals for over 15 years, this portfolio of work spanning human-wildlife conflict and wildlife management (including lethal and non-lethal approaches, e.g. Baker & Macdonald (1999), Baker et al. (2007a), Baker et al. (2012)), foxhunting (Baker & Macdonald, 2000) and animal welfare in wildlife trade (Baker et al., 2013), including the trade in wild animals for use as pets (Bush et al., 2014).

Our work on non-lethal wildlife management has focused largely on developing the use of learned food aversions for protecting target foods from wild mammals and birds. Such foods might be of conservation concern, e.g. the eggs of ground-nesting birds, or of agricultural or horticultural (and thus financial) value. As well as the obvious welfare advantage of not killing animals considered to be pests, non-lethal wildlife management may bring other practical benefits. For example, where a territorial animal is allowed to remain in situ, it prevents the invasion of conspecifics that can often follow the removal of a territory holder. The territory holder can instead be trained to avoid certain foods and in effect the ‘poacher’ becomes ‘gamekeeper’. We conducted the first ever food aversion research with carrion crows (Corvus corone) and magpies (Pica pica) (Cox et al., 2004; Prescott et al., 1997). We conducted experiments to manipulate the food preferences of wild-caught birds in captivity, using Conditioned Taste Aversion (CTA), a particular kind of food aversion thought to have evolved among all taxa to allow animals to avoid poisoning. Birds are primarily visual animals and visual cues are therefore important in food selection. We successfully trained magpies to switch the colour of egg that they preferred to attack first; they subsequently showed colour-specific aversion to eggs and consumed less egg in total (Prescott et al., 1997). We developed our findings with magpies for the study on crows and trained them to delay their attack on a previously favoured egg colour even when this was subsequently untreated (Cox et al., 2004). We also established that crows did not generalize their aversion to eggs of a different colour, a potentially important consideration when designing realistic wildlife management strategies. These findings might be used to protect viable eggs of a particular target species from predation by wild corvids.

We have also demonstrated that learned food aversions may be used to protect target foods from mammals such as badgers and foxes. We set out to identify a practical non-lethal method of controlling wild mammal foraging, using European badgers (Meles meles) as models (badgers make excellent models for this work because they are opportunistic omnivores, widely reported as crop pests, and distributed across much of the northern hemisphere). This work was pioneering in that we conducted an iterative series of lab-style field experiments on wild animals in their natural environment, using video to record their detailed individual responses to variously treated target foods (Baker et al., 2005a, 2005b, 2007b, 2008). This was the first known CTA research conducted on badgers. In contrast to birds, mammals are olfactory animals and odours are important in their selection of food. First we established that badgers could be trained to avoid, at a distance (on the basis of odour), previously-favoured foods treated with an aversive agent (Baker et al., 2005b). Next we established that they could also learn to avoid untreated foods in the presence of an odour cue (Baker et al., 2007b). Then we conducted a dosage trial to establish the lowest effective dose on model crops (maize cobs) (Baker et al., 2005a), and finally we used this dose to demonstrate that badgers could be trained to avoid untreated maize cobs on the basis of an odour cue (Baker et al., 2008). We have also conducted related work on foxes using a process called Generalised Aversion in which an aversion is created using a bitter tasting substance called BitrexTM (Macdonald & Baker 2004). Generalised Aversion makes use of the fact that many animals have evolved to avoid potentially toxic alkaloids on the basis of bitterness. Our work has demonstrated learned food aversions could potentially provide a targeted, non-lethal approach for managing undesirable wildlife feeding behaviour.

We have recently completed a suite of studies on the humane management of moles. Until recently the most popular method of killing moles among farmers was strychnine poison. Strychnine kills by suffocation through paralysis of the respiratory muscles. Until recently, strychnine was uniquely available in Europe, and among species, for killing moles in the UK. In 2006 strychnine was withdrawn from use despite outcry from many users. We conducted a national survey of farmers, amenity managers and gardeners, to examine mole activity, damage and control in the UK following the strychnine ban (Baker et al., in prep). The survey also revealed that both the importance of humaneness in choosing a mole control method, and opinions regarding the humaneness of various mole control methods (including lethal and non-lethal methods), vary among stakeholder groups. Following on from the survey, we conducted a pilot study on translocating moles as an alternative to culling (Shaw et al. in prep.) and post-mortem research on moles, kill-trapped by farmers and professional pest controllers, to examine the likely humaneness of kill-trapping (Baker et al., submitted). We are in the process of publishing the results of this work.

We also tested the mechanical performance, and potential welfare implications, of unregulated spring traps available for killing moles, rats and mice (Baker et al., 2012). Unlike other spring traps, mole traps and break-back traps for killing rats and mice do not require welfare approval in the UK. We found several-fold variation in both the impact momentum and clamping force produced by traps available for each species, and considerable overlap between the strongest mouse and weakest rat traps. Impact momentum and clamping force were related to trap-opening angle and spring type in break-back traps, indicating that some of the new-style plastic traps (designed to prevent users having to touch dead rodents) are weaker than traditional models. These results indicate significant scope for improving the humaneness of spring traps for rats, mice and moles and our findings could help improve rodent trap design and assist consumers in selecting more powerful traps.

In 1995 we used farmer questionnaires to study attitudes towards, and drivers of, fox hunting with hounds (Baker & Macdonald, 2000). Although two-thirds of farmers did not consider the fox to be a personal pest, most felt that foxes should be controlled everywhere, because they were too numerous. Where farmers’ opinions of fox pest status were influenced by personal stock loss, their primary concern was chickens, generally kept on a non-commercial scale. The evidence was that hunting with hounds contributed only 5% to total fox mortality, with most being shot. More foxes were reported shot on farms where foxes were perceived as pests, where lamb or gamebird losses were reported or where shooting was considered effective or humane. The Hunt was less responsive to such situations, paying fewer visits to farms where the fox was considered a pest or the farmer welcomed the Hunt. Hunting was more common on farms reporting fewer foxes, less livestock farming and fewer fox pest problems. These farms probably presented fewer incompatibilities with, or access problems for, the Hunt. Most farmers tolerated rather than encouraged hunting on their land, even where foxes were considered a pest. Responses from hunting farmers suggested that hunting was considered primarily as recreation, and secondarily as a fox control method.

Another strand to our wild animal welfare-related work is research on wildlife trade. In our systematic review of animal welfare in the global wildlife trade (Baker et al., 2013), we found that ‘welfare’ was rarely mentioned, evidence of welfare impact was rarely recorded and welfare improvement rarely recommended. Evidence suggested that welfare impacts might be underreported, particularly in international, illegal, and wild-caught trade and trade in reptiles. Trade reports most often related to mammals (2–4 times more frequently than other taxa), followed by reptiles, birds and amphibians. The main focus of literature was on animals (mainly mammals) killed on site for body parts, for use in traditional medicine or luxury goods and foods. However, the capacity for animal suffering in trade is likely to be greater when animals are captured alive and either transported before killing, or traded for live use. Indeed, welfare impacts in each of five domains were least often reported when animals were killed on site. Impacts in the domains ‘food or water deprivation or malnutrition’, ‘environmental challenge’, and ‘disease, injury, or functional impairment’ were more often reported when animals were captured alive, transported, and killed, while ‘behavioural or interactive restriction’ and ‘anxiety, fear, pain, or distress’ were more often associated with animals being used alive. The main driver of trade involving live animal use was demand for pets and entertainment, and reports of animals being captured alive related mostly to birds, reptiles or amphibians (Baker et al., 2013). We concluded that greater attention should be paid to the welfare of animals traded alive and in larger numbers (such as birds, reptiles, amphibians) and to those (including mammals) potentially subject to greater impacts through live use (such as for use as pets). More evidence based research is needed on animal welfare in wildlife trade and this should be integrated with wider issues to benefit people and wildlife (Baker et al., 2013). We have since completed a follow-up study of the exotic pet trade, due to be published soon (Bush et al., 2014).

We are currently consolidating our research on humane wildlife management in exciting new work on the quantitative assessment of the welfare impacts of vertebrate pest management in the UK.