It’s one thing to document forest loss, to understand its detailed ecological consequences and, even, to predict that in the face of inevitable development it will get worse. But can something useful be done? That was the question that lay behind more than five years of intensive fieldwork, and the collection of thousands of camera-trap images from Borneo, writes David Macdonald.

Our idea, using clouded leopards as metaphors for forest biodiversity was to learn enough about their habitat requirements not only to predict the consequences of development but also to create a Tool Kit that would allow us to work with planners to minimize those consequences inimical to biodiversity. Working with conservation colleagues, NGOs and government officials, WildCRU’s first Tool Kit meeting took place in Sabah in 2017, the next, culminating in a meeting with Deputy Prime Minister Christine Liew in 2018, has now led to publication of a unique case study of Sabah’s 2033 Structure Plan.

Methodologically, our journey integrated methods from landscape ecology and landscape genetics into a GIS-based analytical framework, which enables us to evaluate the impacts of development and/or forest restoration strategies on landscape connectivity, population dynamics and genetic diversity. The team, led by WildCRU’s Zaneta Kaszta, analyzed the impact of 41 development scenarios for roads and railways and 17 scenarios of new forest restoration areas proposed in the Structure Plan. We also modelled the collective effect of all developments, restorations and the full Structure Plan, as well as the impact of road mortality. Methods to measure and map synoptic landscape connectivity necessary for a species to establish a home range and to disperse, allowed us to visualize, quantify and compare the impact of each component of the Structure Plan (scenarios) on Sunda clouded leopard population connectivity. We then assessed the individual and collective impact of these components on clouded leopard population dynamics, like population size and genetic diversity, over 200 generations.

First, we found an extinction debt – the current clouded leopard population appears to be larger (by 26% if our calculations are right) than the country’s carrying capacity – we suspect this is because the population hasn’t yet shrunk to match the new reality following recent developments. Looking ahead, we predict that proposed developments in Sabah may decrease landscape connectivity by 23% and, if the increased mortality risk associated with these developments is considered, result in a 40–63% decrease in population size and substantial reduction in genetic diversity. Eager to limit these negative impacts we simulated how they could be mitigated by realistically modest adjustments to the Structure Plan, for example, redirecting a proposed road or railway by a few kilometres or compensatory forest restoration swaps – such planning explorations were the essential idea of the Tool Kits. Sadly, in this case, such tweaking of the plan delivered only limited mitigated of the impact on clouded leopards: the obvious lesson is that we need to influence the planning process at an earlier stage.

The WildCRU team has already held workshops with government colleagues elsewhere in SE Asia, using mainland clouded leopards as a model in Myanmar, Laos and Bhutan, and using lions in Botswana and Zimbabwe. We are already recruiting trainees to work with the Tool Kits and thus enable these governments better to explore their development plans in the light of conservation impacts. 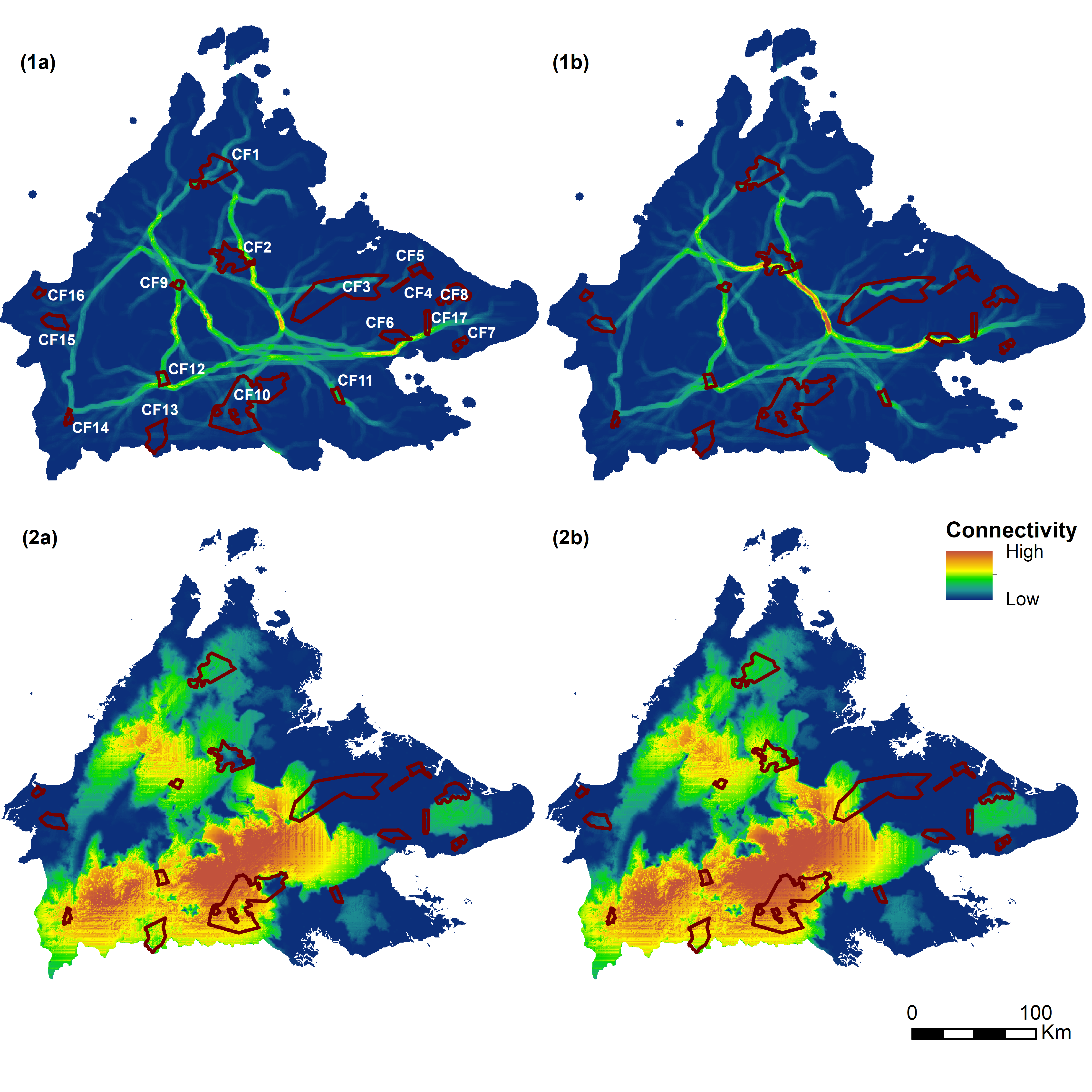 Fig.1. Long distance dispersal corridors (1) and movement density surface (2) for the base scenario (a) and scenario incorporating all forest restoration areas marked in red (b) 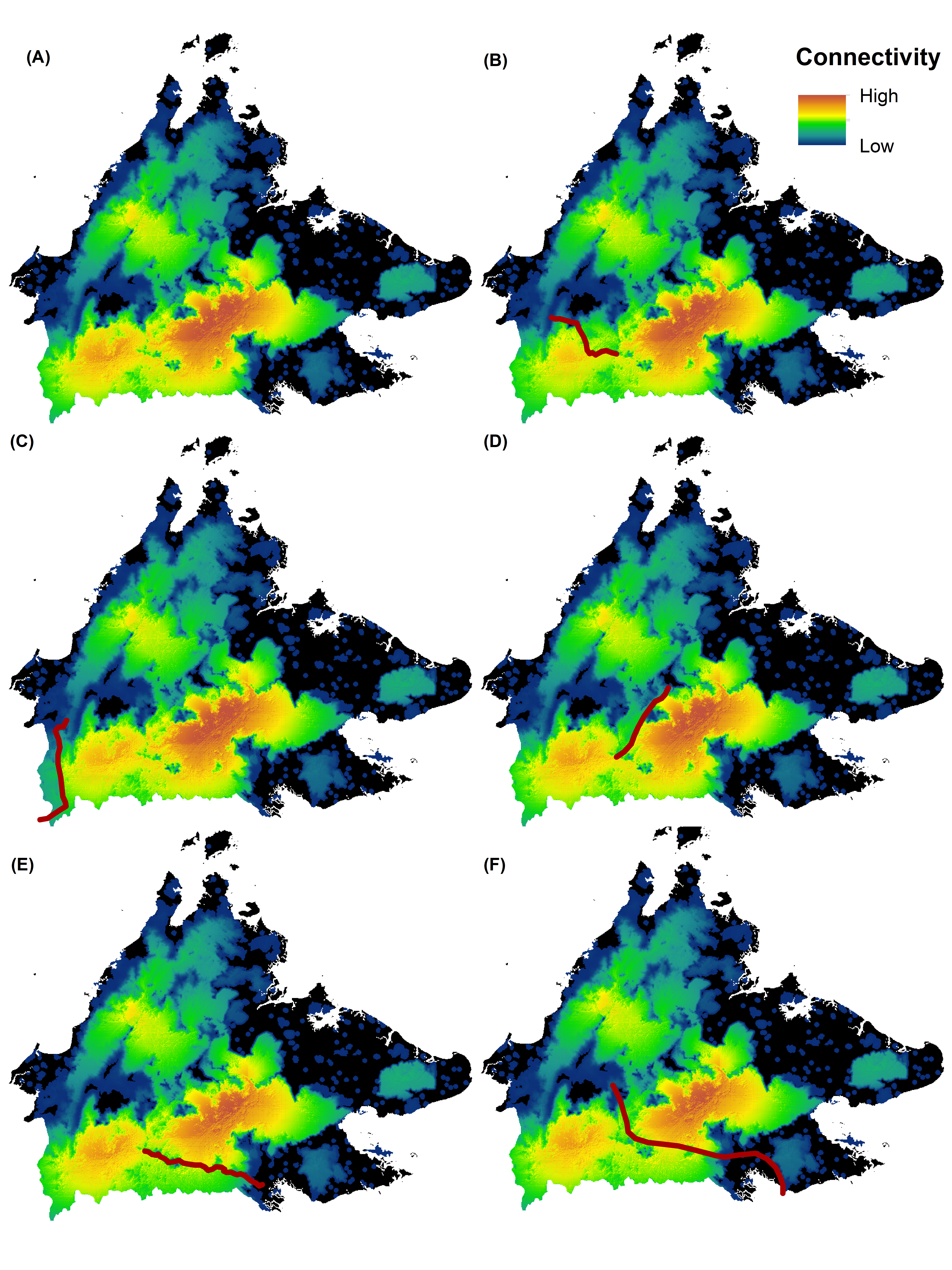 Fig.2. Effect of the most influential scenarios on movement density surface (A – current state, B to F – segments or highways and railway).