A collaboration with the Ethiopian Wildlife Conservation Authority (EWCA) to assess the status of four large carnivores in Ethiopia; lions, leopards, cheetahs and African wild dogs. We also collect data on spotted and striped hyaenas, Ethiopian wolves and African wolves and larger prey species wherever these overlap with the distribution of our focal species. Opportunistic data suggest that large carnivores have disappeared from vast areas of Ethiopia, but there is a paucity of data (Table 1 below).

LCSE combines existing information and new data resulting from selected field surveys to facilitate the implementation of existing national action plans for these species, and help establish priorities for the efficient application of limited conservation resources.

The first step of the LCSE was to model habitat suitability for these species across Ethiopia. The map shows landscapes that have most species, and identifies the most promising habitats in southern Ethiopia and in the Awash Valley. 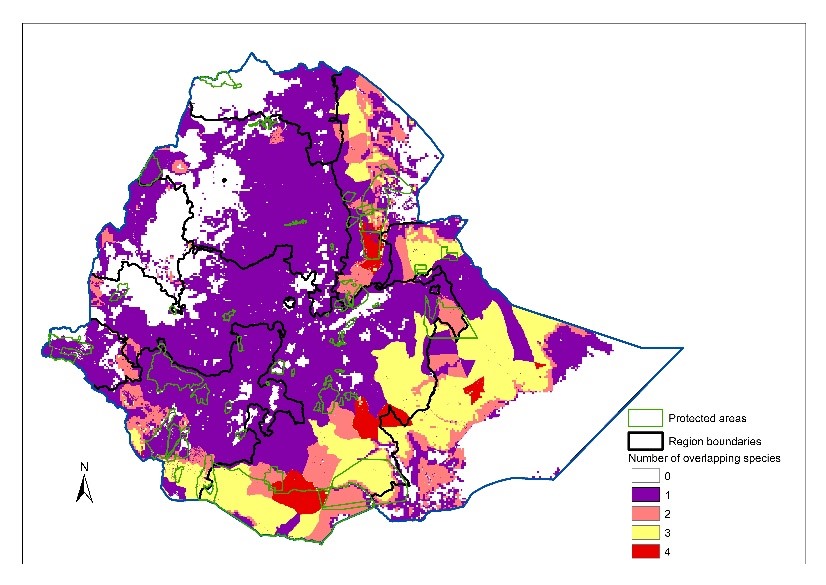 We do reconnaissance surveys and then follow up surveys in the abovementioned ecosystems. Reconnaissance consists of a trek across a range with a team of local experts, including park rangers, opportunistically recording all wildlife signs: direct observations, footprints, droppings, carcasses, audio (e.g. roaring) and mention of these carnivores in local culture. We use a few camera traps for a few days to test the feasibility of this methodology in a structured camera trap survey later on. These reconnaissance surveys give information on species presence or absence, but not on their density or abundance.

Structured surveys typically involve camera trapping, with one camera in every cell of a grid of 5x5km. Surveys will also include call-ups, i.e., playing calls of animals to attract carnivores for their identification, and spoor surveys where roads are available. While the focus of the research is on large carnivores, data on other wildlife presence is also recorded.

Surveys are in progress, but the following material is already available:

The LCSE is supported by the Born Free Foundation and Leipzig Zoo. It is a partnership between EWCA, and WildCRU at the University of Oxford, with additional collaborations with University of Antwerp, Professor Gidey Yirga of University of Mekelle and University of Hawassa.