This conservation initiative is the first of its kind in Bolivia, and aims to study the population dynamics of bears and the drivers of human-bear conflict in the Andean dry forests of Bolivia.

The dry forests of the Andes are being cut down to make way for agricultural land, oil extraction and the building of new roads. This development is pushing the species closer to extinction. The bear plays a vital role in the survival of these dry forests by dispersing seeds from the fruit that they eat. As a result of their homes shrinking they are wandering into agricultural land in the search for food. This has led to tension between local communities and the bears; they are being hunted and killed in retaliation for damaging crops and livestock.

This is a joint project between Chester Zoo and WildCRU that aims to study the population dynamics of bears and the drivers of human-bear conflict occurring in the Andean dry forests of Tarija, Bolivia; an ecosystem already identified as a priority for Andean bear research and conservation.

The species is currently listed by the IUCN as ‘Vulnerable’ across its range. The categorisation of the Andean bear is based on population trends, habitat models and levels of human-bear conflict. This project will generate the first population estimates in southern Bolivia, quantify the levels of human-bear conflict, and together with the communities, develop measures to reduce conflict. 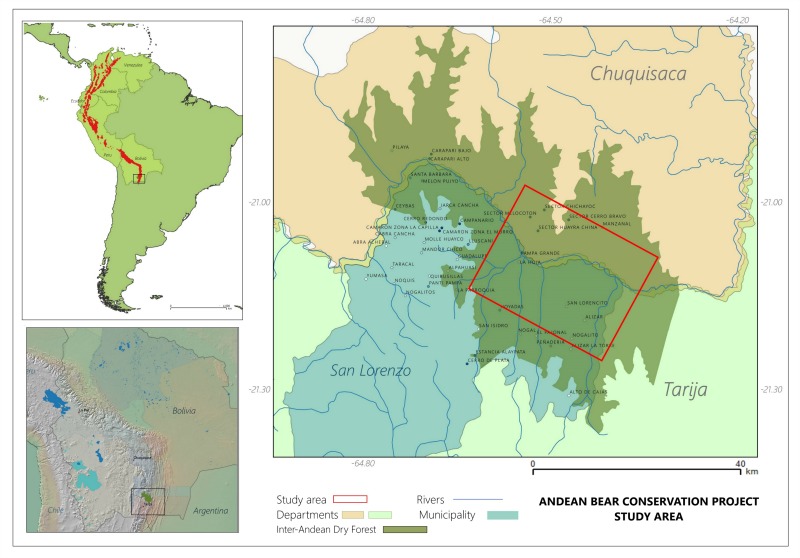 The initiative has so far received a positive response from the local authorities and in August 2016 we set up camera traps. After five months of camera monitoring, we captured not only the first ever photograph of an Andean bear in the Inter-Andean Dry forests of Tarija, but other species adapted to live in this threatened ecosystem, including a family of pumas.